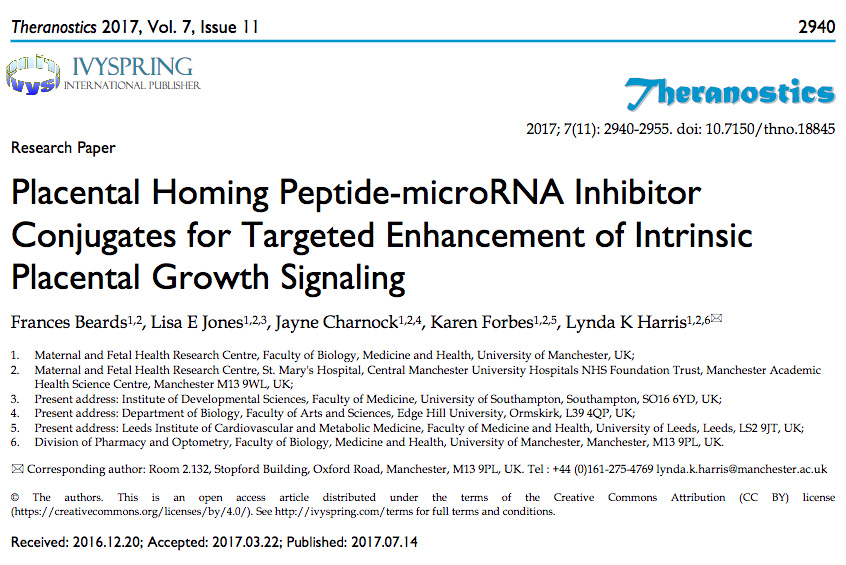 Many serious pregnancy complications such as pre-eclampsia (high blood pressure and protein present in the urine), fetal growth restriction (FGR; the baby is smaller than average) and macrosomia (baby is larger than average) develop as a result of suboptimal growth and development of the placenta. The placenta is the interface between mother and baby for nutrient transfer.

These conditions can lead to preterm delivery which in turn can cause complications. Babies who are born too early have an increased risk of developing cardiovascular and metabolic diseases, but there are currently no treatments available during pregnancy. Administration of a drug via an injection in human pregnancy can cause dangerous side effects and disturbances to the fetus’ development (teratogenicity). We all take pain killers for headaches from time-to-time right? You just pop them into your mouth, and the drug circulates throughout your whole body. This means at the site of pain, the drug is more diluted but may also result in unwanted effects.

This paper is therefore all about trying to target the placenta specifically with a therapeutic to improve placental growth and development. The human placenta has two different layers: the outer syncytium, which is the site of nutrient transfer, and the underlying layer of proliferating cytotrophoblasts (CTB). These CTBs are important for growth and supporting nutritional demands of the growing fetus. These cells divide, and fuse with the syncytium.

The rate of growth/proliferation is affected by various hormones and growth factors but also regulated by small RNA molecules called microRNAs (miRs). These regulate gene expression and consequently alter various biological processes such as cell proliferation. miR-145 and miR-675 are known to cause a reduction in placental growth, and so inhibiting these could improve placental growth in the pregnant women. But how does this get around the issue of teratogenicity? Well, our group have shown it’s possible to deliver a therapeutic molecule, which is packaged in lipids (a liposome), specifically to the placenta with minimising unwanted effects in the mother and fetus. This is done by using a specific placental homing peptide conjugate (a link of small molecules that form the foundations of proteins) which selectively binds to the placental surface. Think of it as a molecular postcode for the placenta!

So, put two and two together and in this paper, we tried to use placental homing peptides to deliver miR-145 and miR-675 inhibitors directly to the placenta with the aim to enhance placental growth.

What did we do?

Ensuring that the miR inhibitors can be used as a clinical intervention for poor placental growth and development means prior safety testing. We need to make sure that their delivery doesn’t cause detrimental effects. We exposed pregnant mice to either a short or longer-term treatment of a fluorescent-labelled non-specific inhibitor. With a fluorescence microscope, we visualised the presence and localisation of it (miR inhibitor in green) within the mouse placenta. Localisation of the miR inhibitor was found in the short-term treatment and also in the longer term one too. 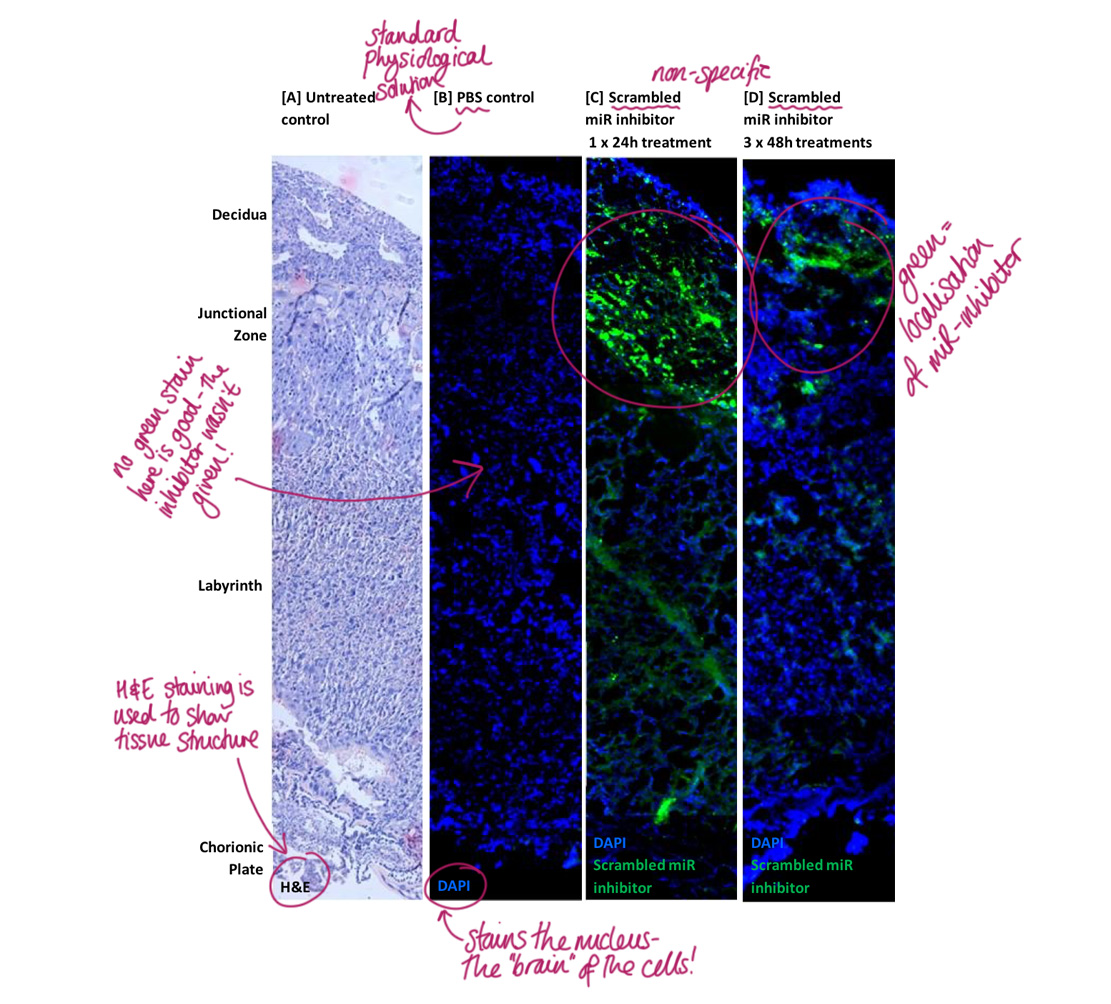 The miR inhibitor was not found in fetal tissues which is great! However, we found it localised in some of the maternal tissues suggesting a possibility of off-target effects – something that would need to be investigated further. The non-specific miR inhibitor didn’t cause a change to fetal or placental weight, litter size or the present of fetal abnormalities, so this indicates that it’s tolerated well in pregnancy… phew!

Pregnant mice were either injected with a control solution (PBS), the non-specific (scrambled) inhibitor, or the treatments miR-675 inhibitor or miR-145 inhibitor.

The miR-675 inhibitor did significantly increase placental weight. However, miR-145 did not. Despite this, interestingly a statistical test confirmed that it did reduce variability in placental weight. No placentas fell below the 10th weight centile for either inhibitor, which suggests they have growth-promoting effects.

Both miR-675 and miR-145 inhibitors increased fetal weight but the non-specific inhibitor altered the fetal weight distribution as well. At the moment, we aren’t too sure why. One potential reason could be species-specific effects, but if you want to geek out, check out the discussion section of the paper (link below) where other suggestions are discussed! 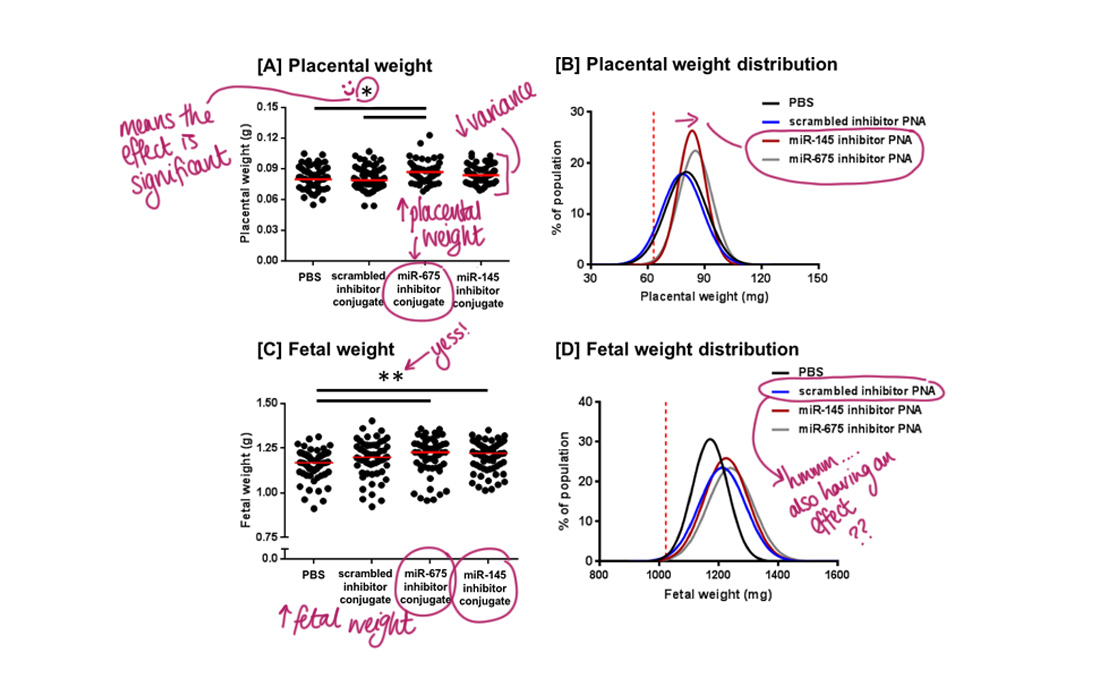 We also tested the two specific miR inhibitors for any changes in litter size and number of miscarriages. Neither had an effect therefore further suggesting that this novel treatment is safe to use in pregnant mice, another step in the right direction!

Placental explants, which are chunks of fresh tissue, from first trimester (early pregnancy) and term (end of pregnancy) were cultured in the miR-675 inhibitor or miR-145 inhibitor with or without the placental homing peptide added on.  Both miR-675 and miR-145 with the peptide significantly increased the placental CTB cell proliferation, but so did their equivalents without the homing peptide, which was interesting. This enhanced cell proliferation was only found in first trimester placental samples.

Without getting bogged down in all the intense sciencey discussion of this data (again, feel free to view the link for the actual paper below if you would like to read some more), what can we conclude from this study?

Of course, further research is required to push the therapeutic potential of placental homing peptide-microRNA inhibitors further in the hope they will enter clinical trials in the future, but this study provides some really interesting data. Watch this space!

Want to read more and delve into the details? You can find the original paper here.

This article was first published on Lisa’s science blog ‘In a Science World‘, check it out!